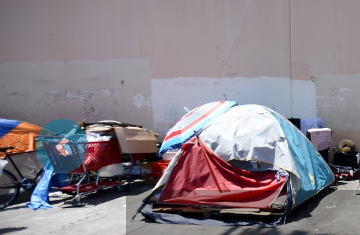 The homeless on Skid Row finally got a break on Wednesday when the City Council agreed to stop confiscating the precious belongings of those living on the streets.

Except for Councilmembers Jose Huizar and Joe Buscaino, the City Council understands that sweeping up the personal belongings of the homeless is inhumane and cruel.

The FBI investigation continues into Councilmembers Huizar and Curren Price along with a senior aide to Council President Herb Wesson and former top aides to Mayor Garcetti. Huizar’s vote this week against protecting the belongings of the homeless is another sign of his utter disconnect from Los Angeles.

Beloved civil rights attorney Carol Sobel won a clear victory for civil rights last year when the Judge in the case issued an injunction stopping the sweeps. Sobel and the Judge sent a strong message to the developers and heartless Business Improvement District security guards who repress the poorest people in Los Angeles through regular sweeps to confiscate their belongings.

Sobel told the Coalition to Preserve LA this week she is very happy about the City Council’s vote. “We have a housing crisis: it can be solved. Build homes, not skyscrapers, so every Angeleno has a safe place to sleep at night.”

On March 4, the Los Angeles Homeless Service Authority (LAHSA) issued its guidelines for the homeless. These guidelines help cement the settlement of the Mitchell lawsuit to further the protection of the homeless. Sobel agrees that these guidelines are important. The guidelines state, in part, that, “We need to end our neighbors’ homelessness, not sweep it out of sight.”

Jill Stewart, Executive Director of Coalition to Preserve LA, said, “Ending homelessness will come not because Mayor Garcetti makes a statement every year that he is going to end homelessness for good. It will end when the city stops giving away favors to billionaire developers to build endless luxury apartment towers.”

Shortly after the Mitchell v. City of Los Angeles lawsuit was filed, the City Council swiftly passed an ordinance limiting a homeless person’s belongings to a 60-gallon bag and required the city to give 24-hour notice of cleanups.