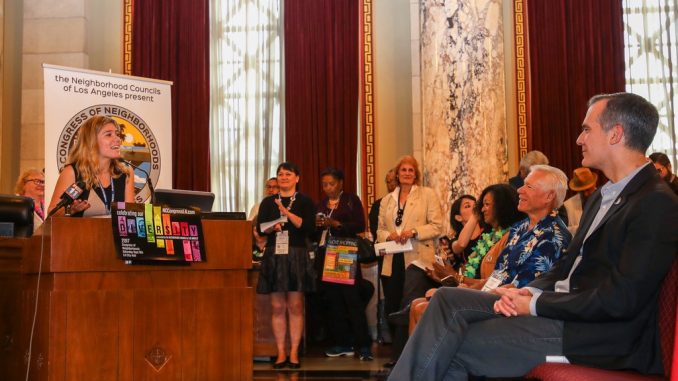 September is Civic Engagement Month in honor of the work of the Neighborhood Councils and of all the City’s public engagement efforts! Civic Engagement is about getting involved in your community. You are never too young or too old to get involved. Find out how!

The month was kicked off in City Hall on September 1 with a proclamation presented by City Council President Herb Wesson to the Board of Neighborhood Commissioners President Joy Atkinson and Department of Neighborhood Empowerment General Manager Grayce Lui.

Also part of the celebration is a Neighborhood Council display on the bridge between City Hall and City Hall East. One of our Clean Ups was featured in this panel displayed on the bridge: 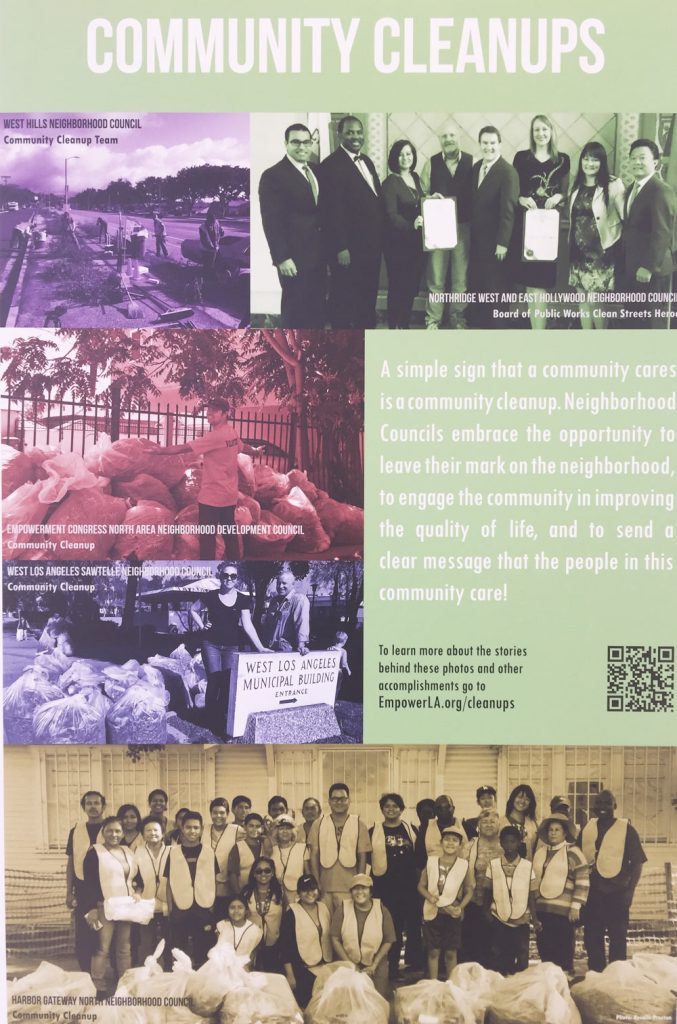 The big event of Civic Engagement Month is the Congress of Neighborhoods, which was held Saturday, September 9, 2017 at City Hall, with over 1,100 participants including neighborhood council board members and stakeholders. The annual day long event brings attendees together with elected city officials and representatives of city departments for a day of learning and networking.

Participants were welcomed in the morning session by Mayor Eric Garcetti, who reminded the crowd how important they are to the City of LA. “Congress of Neighborhoods brings together hundreds of leaders from all of L.A.’s Neighborhood Councils — where our residents become active partners in our democracy, help chart a course for our city, and make your voices heard and your values known” said Garcetti. “Neighborhood Council Leaders are Local Stars”.

The keynote address was given by LA County Supervisor Mark Ridley-Thomas who began the Empowerment Congress back in 1992 to Educate, Engage, and Empower. He said the need is as strong today to build community together.

But it was a 17 year old who stole the show. The Mayor was anxious to hear from Lily Larsen, a member of the Mayor’s Youth Council. She is literally a poster child for civic engagement. She spoke about how her mom took her to the Million Man March when she was five and she has been politically active ever since. She exhorted the crowd, “You are never too young to get involved in your community.” And we presume that you are never too old either!

So let’s get started! You have a lot of options on how to get civically engaged: